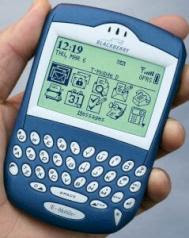 There are confused reports, but it seems there are two separate issues, each with their own workaround:

RIM's public position is that NTP's patents are invalid. However, in case of legal injunction, workaround #1 is all that is necessary. However, it looks like RIM is also secretly readying workaround #2 just in case. I've not been briefed by RIM on #2 -- this information is coming from anonymous RIM customers.

The user isn't likely to perceive any impact from workaround #1 -- it will simply delay some messages by a few seconds. However, workaround #2 is a different matter. If the anonymous reports are to be believed, #2 basically breaks the BlackBerry secret sauce. If the user needs to think about receiving messages, it isn't a BlackBerry any more -- it's just a wireless email device just like any other, except with a rather ugly on-screen graphic design. Users who are, say, riding the subway won't be able to read messages unless they explicitly pulled them before moving out of the coverage area.

RIM needs to avoid workaround #2 at all costs.

Posted by Richi Jennings at 22:40 No comments: Links to this post

An interesting quote from the HP Annual Report. Mark Hurd, HP CEO and President wrote in his covering letter:

The best way to steer a company toward growth is to look out four or five years at the big market trends evolving, and then work backward to identify opportunities ... People will become increasingly mobile — and we see this trend accelerating. The convergence of voice and data services is inevitable. People will be able to receive e-mail via voicemail or receive voicemail via e-mail. The ability to have a mobile office and personalized services delivered to individuals no matter where they are will become a reality.

Which was exactly where plans for OpenMail were heading, sadly. (HT: Stuart "strawberry" Barry)

Posted by Richi Jennings at 14:19 No comments: Links to this post

As I said in my previous missive, Goodmail adds no practical value from the user's perspective. Goodmail deliberately misses the opportunity to protect them from phishing.

Goodmail could do so much more to warn users about scams involving sender impersonation ("phishing"). Right now, it's only certifying legitimate mail as "good." It's not spotting scam mail as "bad" -- even though it should be perfectly capable of doing so. It's very little use to consumers to simply reinforce the good, without issuing warnings about the bad. You're asking people to infer that scam email is bad (because it's not "good"). That simply doesn't work -- the psychology is all wrong.

Let's imagine that your mom's bank is a Goodmail customer. When she gets email from her bank, there's a comforting icon promising that the email is authentic. However, if a Russian mafia gang sends her some email pretending to be her bank, Goodmail says nothing -- even though they should be fully capable of popping up a big red, flashing warning.

The lack of phishing warnings is a huge missed opportunity. Both for consumers and for Goodmail's customers. Neither you, your mom or her bank want your mom to be fooled by criminals.

Posted by Richi Jennings at 09:56 2 comments: Links to this post
tags: spam

I'm going to be on TV today

In case you care, and if you're anywhere near CNBC today at 4.15-ish (EST), I'm going to be interviewed live from London. Topic is the ongoing AOL/Yahoo/Goodmail thing.

Hopefully it'll be more contentful than my soundbite on NPR's Marketplace show this morning.

Posted by Richi Jennings at 19:00 No comments: Links to this post
tags: spam

Goodmail Systems has announced that AOL will be using its "postage stamp for email" approach to replace or augment AOL's current "enhanced whitelist" functionality. What's going on?.

In essence, AOL has outsourced some of its whitelist to Goodmail. Goodmail will impose a "tax" on commercial senders, if they wish to have first class delivery to AOL users' inboxes. First class in this context means bypassing spam filters and having images and links function correctly without the user being warned of their potential danger. A portion of the tax revenue is returned to AOL (the amount is undisclosed, but we believe it to be at least half) and the rest is retained by Goodmail.

This is an interesting service provided to senders by Goodmail -- the value provided in return for the fees is that senders get better delivery rates and more accurate feedback about whether messages got delivered and/or opened. However, there are also negative implications.

Some senders will object to being "held to ransom." The danger to Goodmail and AOL is that one of the big senders will be big enough to encourage AOL users to use a different email service. Alternatively, they may simply put more emphasis on their own portal messaging systems, like eBay is beginning to. Then they just have to send short text-only mails to AOL users to ask them to check the eBay site.

And what of the poor AOL customer? As I've said before, Goodmail adds no practical value from the user's perspective. Goodmail (and Iconix) deliberately miss the opportunity to protect them from phishing -- there's no big red flashing warning icon when a phishing email is received.

Tags:spam.
Posted by Richi Jennings at 11:04 No comments: Links to this post
tags: spam

Need a place to stay in SF?

brrreeeport
Posted by Richi Jennings at 19:28 No comments: Links to this post 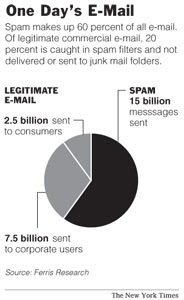 Saturday's New York Times contained a story quoting my opinion on the Goodmail debacle. (I was wearing my Ferris Research hat, natch.) It also had a pie chart, attributed to Ferris Research, illustrating the proportions of legitimate email that are sent to businesses, sent to consumers, and sent by spammers. The caption of the chart implied that 20% of email gets accidentally deleted or quarantined by spam filters. Ouch. While "false positives" are still a significant problem, this figure is of course far too high. Unfortunately, the sense of the original statistic seems to have been lost in the editing process.

Typical false positive rates experienced by spam filter users are closer to 0.1%. State-of-the-art filters can achieve 0.001% -- equivalent to about one legitimate message per month.

The figure that I gave the NYT was the "lost" proportion of legitimate, bulk email -- e.g. legitimate direct marketing and transactional messages. This is roughly 20%, but dropping fast as better spam filters are implemented. While the Times' caption wasn't wrong, it was apparently misleading without the original context, as illustrated by the requests for clarification I've since received!